In view of the current pandemic and upon decision of the organizers, this conference was postponed from April to 23rd Sept.

The Journée Georges de Rham has been introduced in 1991 by the Troisième cycle romand de mathématiques. It convenes mathematicians not only of the CUSO universities, but also from the whole of Switzerland and from abroad and stimulates interaction between professors, postdocs and PhD students. Every year, the organisers invite two speakers of international reputation who present their vision of contemporary mathematics and of future developments. A particular aim is to offer doctoral students a modern high class perspective of mathematical sciences and to establish contacts on an international level and with other research groups.

How well can you approximate real numbers by fractions with denominators coming from a given set? Although this old question has applications in many areas, in general this question seems impossibly hard - we don’t even know whether e+pi is rational or not!

If you allow for a tiny number of bad exceptions, then a beautiful dichotomy occurs - either almost everything can be approximated or almost nothing! I’ll talk about this problem and recent joint work with Dimitris Koukoulopoulos which classifies when these options occur, answering an old question of Duffin and Schaeffer. This relies on a fun blend of different ideas, including ergodic theory, analytic number theory and graph theory.

How can we understand chaotic behaviour mathematically? A well popularized feature of chaotic systems is the butterfly effect: a small variation of initial conditions may lead to drastically different future evolutions, a mechanism at the base of the so-called 'deterministic chaos'. In this talk we will focus on 'parabolic' or 'slowly chaotic' dynamical systems', for which the butterfly effect happens "slowly" (e.g. at (sub) polynomial speed). These include many fundamental examples, both coming from physics (such as the Ehrenfest and Novikov models of metals) and mathematics (such as horocycle flows or smooth flows on surfaces), but are much less understood than 'fast chaotic' (hyperbolic) dynamical systems. We will survey some of the recent advances in our understanding of typical chaotic features as well as common mechanisms for chaos. of generic chaotic properties and key mechanisms which explains them, achieved exploiting a mixture of dynamical, analytic and geometric techniques.

Get out at the tram stop "Plainpalais"

The parking "Plaine de Plainpalais" is available near the building "Uni Bastions". 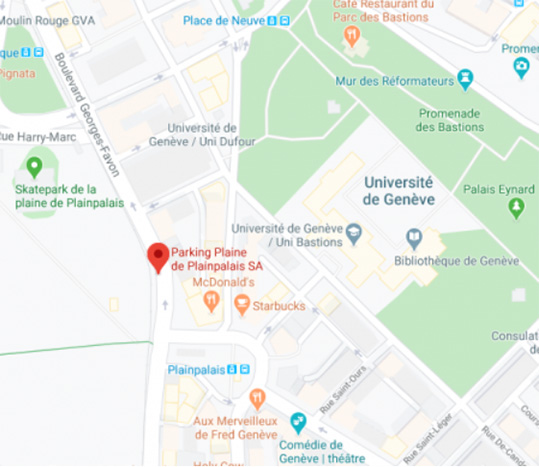