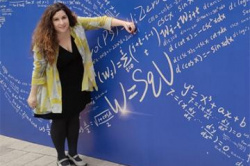 The Women in Geometry and Topology Workshop this year will be taking place in Barcelona, 25th - 27th September and is organized by GEOMVAP. Our Deputy Director and Co-Chair of our Equal Opportunities Committee Anton Alekseev (UNIGE) is part of the Organizing Committee.

In this short interview, Eva Miranda (UPC) also part of the organization committee, tells us about the importance of organizing a women workshop and what she hopes it will achieve.

Can you tell us about your impression of the 2017 Women in Geometry and Topology in Zurich?I remember that when I was first invited to be a speaker at the 2017 Women in Geometry and Topology Workshop in Zurich, organized by SwissMAP, I must admit that I was initially slightly reluctant about the idea of a Workshop highlighting women (or any specific gender) in the title. I was however, very impressed by the event and its success. I was also particularly surprised by the number of men who attended the talks and actively participated by asking questions. This was indeed unexpected for me.

You say you were initially reluctant to participate, are you convinced now of the benefits of this type of event? I believe organizing this type of workshop is very important, not only of women in mathematics or, in this case is geometry and topology, but in other subjects too. As women, we are used to being invited to conferences and finding ourselves to be the only woman or one of the few women speakers. I think it is very pleasant to bring a lot of woman to the surface so that people stop thinking that there are no women in mathematics or in geometry and topology.

People are sometimes a bit hesitant about attending a women conference, as I was. I would like to change this. I want to bring women from different countries together and give them visibility and I also want men to be present. I take this opportunity to encourage people from all genders to come and to participate!

How did you get involved in the organization of this year’s workshop?  During the 2017 workshop in Zurich, Anna Beliakova (UZH) suggested I organize the next workshop in Barcelona… initially I was unsure. I remember then having some very interesting discussions in the conference about how to address the gender gap, how the situation in Switzerland was different from the situation in Spain or Italy and about how every country has a diverse scenario and social ingredients. Notwithstanding, there are also many similarities. Being at the conference and seeing the benefits as well as the different conversations, encouraged me to organize this year’s edition. On the top of that, in 2018 we received a special research project focused on Geometry and Topology SGR932 from Generalitat (GEOMVAP) where Gender balance is one of the strategic objectives as well as public engagement and we decided to include this conference in the list of activities addressing the Gender Gap.

This year one of our public lecture speakers will be Carme Torras (CSIC), who is working in computer science. We are very honoured as she is an exceptional researcher and has been awarded many different prizes; she is a real role model! In fact, our goal is to put forward different examples of role models on the table. We believe this that is important as one of the problems that exists is the visibility and number of women in the mathematics. The more we advance, the less there are. Although this has been a constant problem, the situation is now desperate. In the master class I am teaching this year on differential geometry, I have only one woman out of 11 students.  I believe we really have to do something about this and organizing this workshop is a move in the right direction and I’m hopeful it will contribute to making things change.

Who are you expecting will submit applications for the contributed talks? One of the new features for this year’s workshop is that the call for contributions is also open to men. The plenary speakers are female mathematicians but the call for contributions is open to all genders. We want to have all genders involved because we believe that things are going to change but for this to happen we need the participation of everybody.

Have you also considered having male participants in the panel discussions? The panel discussions are currently being organized.  The list will be out soon and we plan to have men also because it is very important to have all the points of views as this is a common effort.  We would like our panels to also be composed of people who are not in mathematics, we’ve recently invited someone with a social studies background to be part of the panel discussions. We want to have a wide perspective on the problems and solutions. One of our panel discussions will be "From inequalities to equalities: how to break the glass ceiling in maths". The moderator of the panel will be Marta Casanellas (UPC)

The public lectures are an important part of the programme. Can you tell us about the speakers? These public talks are opened to non-experts they are not only for mathematicians. Both speakers are excellent and have very original profiles. One of the talks will be given by Marta Macho (UPV/EHU), recipient of the Ekamunde Equality prize and also chair of mathematics and gender at the University of Bilbao. The title of her talk will be "Sesgos de género en la academia: cuando las matemáticas no funcionan" (Gender bias in academia: When mathematics don't work). Marta gives wonderful talks and I am delighted to have her as a speaker. She has a very different type of approach when she makes talks, I am sure that the participants will not be disappointed with her presentation, she tackles the problems from a different angle and she is very provocative.

We also have a public lecture by Carme Torras, whom I’ve mentioned earlier. Her lecture will be entiled "Cloth manipulation in assistive robotics: Research challenges, ethics and fiction" She has a very interesting profile,  a mathematician who reinvented herself. She is now working in robotics with robots to design clothes (ERC Advanced Grant Clothilde) and in this process of designing clothes there is a lot of mathematics. I don’t know how she finds time, but she is also a science fiction writer.

What would you say are the long term effects of this type of event and what in your opinion is the take home message? On the people who participate as speaker, I think the visibility for women is very important. I will give an example, it is something that can happen too often, when you are a member of a scientific committee and you’re asked to name and propose speakers of the field, in an instinctive way the first names that will cross your mind are people whom you've actually seen giving talks. Perhaps if you’ve never heard of a particular woman giving a talk you would not necessarily think of her. This type of event is also a good way to promote and give women visibility. People will remember them and know which field they are working on.

It is equally important for the new generations, maybe PhD students or maybe Master’s students who might find themselves to be the only woman in their course will be glad to participate in this women workshop and get inspired by the role models.

In summary, I would say that this type of conference firstly, provides great visibility for women researchers. Secondly, it provides role models that can inspire younger generations. Finally, it sends out a message to the grant providers and to society. The grant covering most of this event is from Generalitat and it was awarded to us as part of their strategic objective on gender equality.  We want to tell government to keep moving in this direction and that what we are currently doing is not enough.

I would like to add that one of the footprints that we are going to get from this workshop, is that we are going to offer the opportunity to participants who have a contributed talk, to publish them in a Springer book of the collection Research Perspectives CRM Barcelona which our research group is editing in 2019. So the conference will leave a trace behind not only in our minds but also a printed trace in a book.

Can you tell us about where the workshop will be taking place? The three-day workshop will mostly take place at CRM, which is the main research centre in mathematics in Barcelona. We have decided that the general public talks will be held in the centre of Barcelona at the Institute of Catalan Studies because CRM is just outside Barcelona. Our motivation to organize it in the centre of Barcelona was mainly to give more visibility to this part of the programme, which is of general interest not only to mathematicians but also to the general public.

I want to take advantage to advertise that Barcelona is a wonderful place to visit and also that we have grants available to cover lodgings and registration. Come and visit us! The grant application deadline is 30th June.

Registration for the Women in Geometry and Topology Workshop (Barcelona, 25th - 27th September)

We look forward to seeing you there!

Balancing Yin and Yang in the field of Mathematics: Interview with Prof. Chenchang Zhu