A deal with the devil: making sense of divergent series 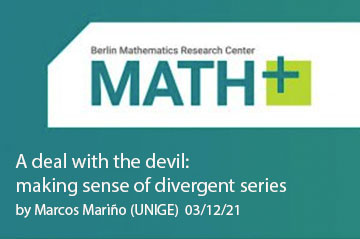 Berlin Mathematics Research Center online talk by our member Marcos Mariño (UNIGE) "A deal with the devil: making sense of divergent series" on 3rd of December at 14:15.

"According to a well-known dictum of Niels Henrik Abel, divergent series are the devil’s invention. In spite of that (or because of that), they appear in many different situations in physics and mathematics. This talk will first review some important examples of divergent series and then show that there is a hidden and rich mathematical structure associated to them. This structure is the subject of the theory of resurgence, and it will be called a resurgent structure. Resurgent structures are particularly important in quantum theory, where they make it possible to discover or rediscover new aspects of quantum phenomena. Although the theory of resurgence was formulated more than forty years ago, it has led to recent developments in geometry and physics, and Mariño will illustrate it with new results in the theory of quantum knot invariants.

Marcos Mariño is a Professor of mathematical physics at the University of Geneva. Formerly, he was a postdoctoral researcher at the universities of Yale, Rutgers and Harvard, and a junior staff member at the Theory Division of CERN. His research focuses on mathematical aspects of quantum field theory and string theory, and in particular on their interface with modern geometry."

A conversation with Alba Grassi