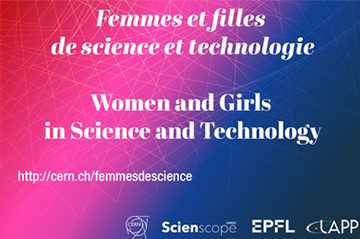 11 February is the International Day of Women and Girls in Science. On this occasion and for the whole week, UNIGE Scienscope, EPFL, LAPP and CERN offer local schools the opportunity to welcome a female scientist/engineer to talk about their profession to the students (in co-educational classes).

Women scientists are invited to talk about their career history, reveal some mysteries of science and, if they wish, to conduct some small demonstrations from 30 January to 3 February 2023 in Schools in the canton of Geneva, the district of Nyon and the departments of Ain and Haute-Savoie. The goal is to change the pupils' perception of the scientific and engineering professions, providing them with female role models. And who knows, perhaps interest more pupils, particularly girls, in a scientific career.

For the seventh year running, CERN, the University of Geneva’s Scienscope, EPFL and the Annecy Particle Physics Laboratory (LAPP) will be joining forces to celebrate the International Day of Women and Girls in Science. From 30 January to 3 February 2023, female science ambassadors will visit local schools to talk to the pupils about their profession. The aim is to change how schoolchildren view scientific, technical and technological professions and to show that they are just as accessible to girls as to boys.

The Women and Girls in Science and Technology week is a huge success every year. This is why we are always looking for more volunteer female scientists willing to give up a bit of their time to visit schools. So come and join the adventure by signing up:

Who is eligible to become an ambassador?

• Registration is open to all women working in a profession connected with science, technology, engineering or maths (STEM), as well as computer science, communication or education.

• Priority will be given to presenters from CERN, the University of Geneva, EPFL and LAPP. If you are not from one of these institutions but would like to take part, contact us.

• You will be required to deliver one-hour presentations for a maximum of 30 pupils aged 7 to 15.

• The majority of presentations will be given in French (95%), but some may also be given in English.

• You will be required to attend a briefing session.