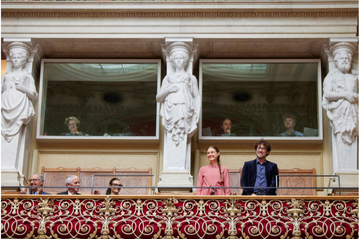 It has been an important day for the Fields Medal winners, Prof. Hugo Duminil-Copin (UNIGE) and Prof. Maryna Viazovska (Ecole polytechnique fédérale de Lausanne), both SwissMAP members. The scientists were invited to the Federal Parliament by the Presidents of the Committees for Science, Education and Culture, Benedikt Würth (State Councillor) and Fabien Fivaz (National Councillor).

Greeted from the Tribune by the President of the National Council Irène Käline and during the session of the Council of States by the First Vice President Brigitte Häberli-Koller, the two laureates then took advantage of exchanges with the parliamentarians to review their respective careers in #mathematics.
Accompanied by the rector of the UNIGE Yves Flueckiger, the vice-dean of the Faculty of Science | University of Geneva Christoph Renner and the president of the EPFL Martin Vetterli, the scientists were able to demonstrate the importance of Swiss universities on the international scientific scene.

The distinction received by Hugo Duminil-Copin honors the University and confirms the excellence of Geneva in the field of mathematics. In 2008, Hugo joined Geneva to do his doctoral thesis. In 2010, his thesis supervisor Stanislav Smirnov received the Fields Medal, followed in 2014 by Martin Hairer and preceded in 1990 by Vaughan Jones - both of whom had completed their doctoral thesis at the Faculty of Sciences of the University of Geneva.