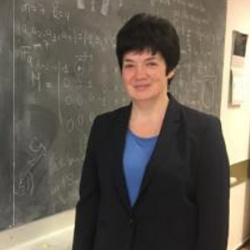 This visitor is part of the SwissMAP Scholar Program

Prof. Anna Rodina is Senior Scientific Researcher in the laboratory of Optics of Semiconductors at Ioffe Institute of Russian Academy of Sciences (St.-Petersburg, Russia). She received her Ph.D. (1993) and Habilitation (2016) degrees in Physics from Ioffe Institute and became the Professor of Russian Academy of Sciences in 2018. The expertise of Prof. Rodina is in the theory of semiconductors and semiconductor nanostructures. The current research interests are focused on the magneto-optical properties and spin-dependent phenomena in colloidal nanocrystals.

Find out more about the SwissMAP Scholar Program.