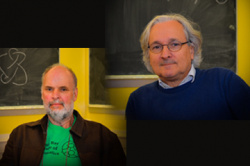 Last month’s conference in honor of Prof. André Haefliger's 90th birthday was very successful. Below are interviews carried out with two of the speakers at the conference, Prof. Ghys and Prof Jones, as well as some photos taken during this three-day event. 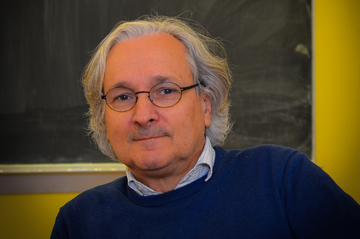 Prof. Etienne Ghys was an invited speaker at our recent Conference in honor of Prof. André Haefliger’s 90th birthday. He is Director of Research at CNRS and works in the École Normale Supérieure de Lyon and has also recently been elected as Permanent Secretary of the Académie de Sciences in Paris.

Prof. Ghys can you please tell us about your research area?

This is the question I did not want to be asked because in fact I like mathematics in general but if I must answer I would say I am a geometer, topologist and I am basically interested by dynamical systems.

Can you tell us about your career highlights?

I would say two moments were particularly important in my career. Firstly when I visited Brazil when I was young. As you know, young French men had to complete a military service and many in fact did not want to do it, as was my case. One of the few possibilities to avoid having to do it was by what is called cooperation, this option offered the possibility of going to a foreign country to teach instead of joining the military. I was extremely pleased when, as part of cooperation, I was nominated to go to Brazil. I spent two years there and it was a completely new world to me in so many aspects, including  mathematics. I think my approach to mathematics in particular has been very influenced by this period and it was actually there that I met André, 40 years ago!

Can you tell us more about when you first met André Haefliger?

I was as a young man in Brazil and in the maths institute where I was working, we had organized an important meeting on dynamical systems. For me, it was the first time in my life I was going to give a talk in front of well-known researchers. I felt nervous and intimidated by the presence of the experts in the room. After my talk I was approached by a person who thanked and complemented me on the talk. However, the person also told me there had been something that they hadn’t understood and that they could not believe it was true and I remember replying that it was true because it was a theorem of a well-known person called Haefliger. That was when he looked at me and replied “I am Haefliger!” That was around 1981 and after that we kept in contact.

He was always incredibly helpful orienting and advising me. Then, in 1986 he invited me to spend the semester in Geneva, this was a great moment, probably the second highlight in my career. At the time there was a very complicated paper by Gromov called Hyperbolic Groups which basically nobody understood. However, as we all agreed it was something important André Haefliger, Pierre de la Harpe and some others in the department decided to organize a weekly seminar in Bern. These lectures were not only fascinating but were also a very important moment  in my mathematical life, later we even wrote a book based on them.

Can you tell us an anecdote or a special moment you remember with him?

I am not sure if he would like this comment but I remember that in seminars he always claimed not to understand and asked many questions. In fact, it was not that he hadn’t understood but rather it was his way of supporting younger participants, particularly beginners.

I remember at the end of the semester we went to an important seminar at the University of Geneva were we concluded our work on hyperbolic groups. That was a great moment where we shared mathematics. André likes to share mathematics with others and he’s totally unselfish and very opened minded. 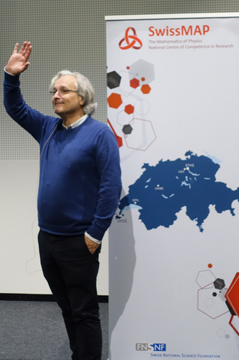 How would you say he influenced your career?

In mathematics there is some kind of balance between abstract theories and concrete objects. Personally, my natural way of thinking is to go towards concrete things but I have to admit that sometimes abstract concepts are fundamental. I would say that André helped me understanding this fact: it is good to build theories that can help you understand examples. In general I am inclined to look at simple tiny objects that I like, for example to look at a beautiful butterfly and André would say let’s look at all butterflies as a population. André likes unifying things.

Would you have a special message for him?

I think he had a perfect career! I have met many great mathematicians, many of which are arrogant and not bothered about speaking with others but André for me is a model. I believe it would be difficult to do better, he is not only a very good mathematician but he is also a very modest person and extremely approachable. People always come to him, he attracts people particularly young students. I try as much as I can to be like him, so my message would be: André, if I could be like you. 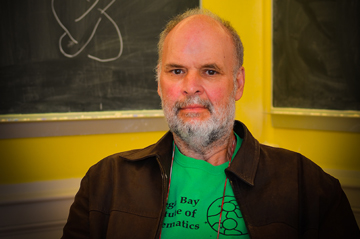 Prof. Vaughan Jones  was an invited speaker at our recent Conference in honor of Prof. André Haefliger’s 90th birthday. Born in New Zealand, he was a student of André Haefliger in Geneva from 1976 to 1980 and is currently working at Vanderbilt University.

Prof. Jones can you please tell us about your research area?

I have various research interests in mathematics including analysis, topology, mathematical physics and algebra.

How did your interest in mathematics initially start?

When I was young I was good at mathematics and I was also equally interested in physics. I’ve always moved between physics and mathematics.

Can you tell us about your career highlight moments?

There were two discoveries I made firstly, around 1981-1982 then, a second one in 1984. The first one was an index for subfactors. It was an exciting moment and a total surprise for me and for everyone else, to have some special set of numbers coming up in a problem that did not seem to have anything to do with them. There was a lot of interaction with Geneva at the time and in 1984 I discovered a new result in Knot Theory which was in a totally different field from what I had been studying. This also came as a great surprise to everyone.

Can you tell us about receiving the Fields Medal?

The Knot Theory result was extremely elementary and not that difficult but in fact, it is quite rare that a new very elementary thing is discovered, because the easy things are already done…. Anyway, there was a lot of publicity. I think that was why they gave me the Fields Medal, but the actual deeper work was already done with the index for subfactors. The Fields Medal itself was not so much of a surprise as there had already been a build up to it but the ceremony and prize were quite overwhelming.

What do you mostly enjoy in research?

The amazing moments when after working so hard and so long on something, all of a sudden you understand and everything simplifies, the whole structure becomes transparent. In fact, that is in a way what you live for, most of the rest of the time is pretty painful, doing things that don’t work. Almost always by definition stuck, except for these rare moments and those rare moments when you are not stuck, all of a sudden they are great!

Can you tell us about when you first met Prof. Haefliger

From 1974 to 1976 I was in the physics department in Geneva and at the end of my studies it looked like the possibility of continuing working there was unlikely.  At the time I was also taking a course from André Haefliger on de Rham Cohomology. I am not sure how but I must have asked  many questions in the course and I guess André was impressed because when I asked him if there was a position in the mathematics department he said “yes, in fact my current teaching assistant is leaving, can you start next week?” That was the beginning of a long and wonderful relationship with him, he was my PhD advisor from 1976 to 1980.

How would you describe him?

He is an extremely warm person, passionately interested in mathematics and by the way also music. I played music with him on several occasions. I used to play the violin, nothing like his level but still he was happy to play with me and we sometimes played quartets at his house and we even played together in the Geneva University Orchestra.

He is a wonderful person and although he was not a specialist in the area in which I did my thesis, I feel I learnt mathematics from him. The real expert was Alain Connes but André clearly influenced me and quite concretely in the algebraic part of my thesis his advice was invaluable-he introduced me to double complexes and spectral sequences in cohomology. 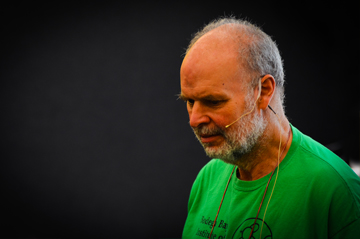 Can you tell us an anecdote or a special moment you remember with André?

He had a pen he used all the time, he’s forgotten about it I know because I’ve asked him. Whenever we went out for lunch, he would always end up discussing mathematics and he used to get this pen out and write on the table cloth (paper…). There was something really special about that pen. Another moment which I remember quite clearly, was around 1976 when I had just started, I went to his office and for some reason asked him a question, I remember addressing him using the polite French form of “vous” and he said to me “on se tutoie ici” so that I would drop formalities,  from then on it was very relaxed.

What would you say were Prof. Haegfliger’s main contributions to mathematics?

What he’s really known for is the theory of foliations. He proved his theorem about non-existence of real analytic foliation and certain kinds of manifolds. He was also a topologist, and I think before his foliation work he was especially interested in knotting of spheres on high dimensional spheres. Nowadays, Haefliger is the name of one of the founding fathers of foliations and there is a Haefliger structure which is kind of generalised foliation.

For non-mathematicians, a foliation is like the famous mille-feuilles. You split up space and you fill it up with these layers called leaves. The way these leaves fit together amongst themselves its quite complicated - much more complicated than a mille-feuilles!

Would you have a special message for him?

Happy birthday André and may there be many more!! 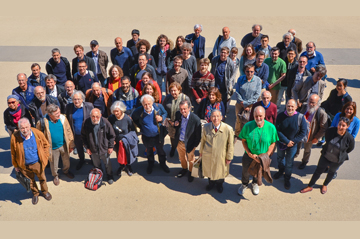 Interview with our Deputy Director