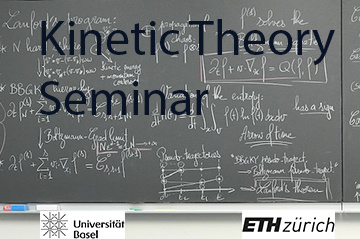 The Kinetic Theory Seminar will bring the Swiss Kinetic Community together and will consists of one (2 hours) seminar per semester, held alternatively at UniBas and at ETH Zurich.

In a recent interview in the SwissMAP Perspectives Jounal, Chiara Saffirio talked to us about the seminars.

Title: From Newton to Boltzmann: Lanford’s theorem, and its generalization to various domains

The description of diluted gases relies on the Boltzmann equation. Despite its fascinating efficiency to encode complex physical behaviors we can observe at our scale, an important paradox arises from this model. Indeed, this equation can be formally obtained from a reversible description of the matter at a microscopic level, assuming that the atoms behave like billiard balls, and evolve according Newton’s laws. On the other hand, the behavior of the fluids verifying the Boltzmann equation is irreversible, since the solutions converge ineluctably towards some equilibrium states.

For this reason, one may wonder if the derivation that was performed is rigorous, and if the equation itself constitutes really a meaningful modelisation of reality. It is not until 1973 that this apparent paradox was properly addressed by Lanford, who provided the first rigorous derivation of the Boltzmann equation.

During the first part of the presentation, after introducing the formal derivation of the Boltzmann equation and its elementary properties, we will study the main tools involved in Lanford’s proof.

Starting with a new writing of the dynamics of a finite number of particles (the BBGKY hierarchy), we will see how it is linked with the Boltzmann equation, and we will present a functional setting in which those objects make sense. Then, in this setting which allows to consider strong solutions of the hierarchies, we will follow the proof introduced in GSRT*, in order to obtain the convergence of the solutions of the BBGKY hierarchy towards the Boltzmann hierarchy. This proof, based on an extensive use of geometrical arguments, is a milestone in the program devoted to complete the original work of Lanford. In the second part, we will investigate how the proof of Lanford can be extended to obtain a rigorous derivation of the Boltzmann equation in a domain with a boundary, with specular reflection as a boundary condition, which remained an open problem. We will start with the simplest case of a non-trivial domain: the half-space. Then, we will see how the proof dealing with the latter case can be modified for the setting of particles evolving around a general, two-dimensional convex obstacle. Finally, if time allows it, we will discuss a work in progress concerning the derivation for particles contained in the disk.