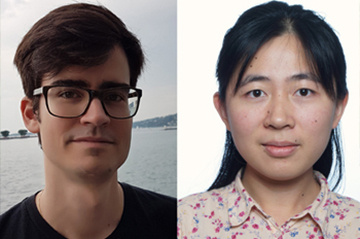 Congratulations to Florian Naef and Wei Qian for receiving the 2017 SwissMAP Innovator Prize!

The SwissMAP Innovator Prize is awarded once a year to PhD students or postdocs for important scientific achievements in the research areas of the NCCR SwissMAP.

Florian Naef is a PhD student at the University of Geneva in the research group of Anton Alekseev. He is awarded for his significant contributions in non-commutative Poisson geometry and Kashiwara-Vergne theory.

Wei Qian is a former PhD student at the ETH Zurich in the research group of Wendelin Werner. She is awarded for her innovative works in two-dimensional random geometry related to the Gaussian Free Field, and in particular on decompositions of two-dimensional Brownian loop-soup clusters.

The award ceremony will take place at the 4th SwissMAP General Meeting in Grindelwald on September 10-13, 2017.