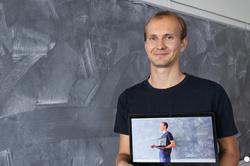 Juhan Aru, was named best teacher in the EPFL mathematics section for 2020. While he usually prefers to teach on a chalkboard, the pandemic forced him to adapt the methods and content he uses for his Bachelor’s classes. An adjustment that Aru, who’s always up for a challenge, took in stride.

Mathematics can be a capricious, rebellious field, highly demanding of both your time and energy. But it can also open the door to creativity, bolster your imagination and give you that gratifying feeling when, “in the middle of a dense forest, you finally find the right path,” says Aru, an tenure-track assistant professor and holder of the Chair of Random Geometry.

Originally from Estonia, Aru enjoys using nature metaphors to describe the field he “loves,” he says, because “I’ve spent a long time in her company.” He believes that mathematics is a science that can “change the way we see and understand the world around us.” That said, he admits that the utility of pure mathematical research is not always obvious. He therefore ventured out briefly into other fields. After obtaining a Bachelor’s degree from Cambridge, he studied at the Center for Interdisciplinary Research in Biology in Paris for two years. This exposed him to the more application-oriented disciplines of microbiology and, following in his neurobiologist brother’s footsteps, neuroscience.

The trek to the top of the mountain

Aru eventually returned to mathematics – probability theory in particular – although he never lost his fascination for life science. That’s one reason why he chose to specialize in random geometry: a perfect way to combine his two interests. “Many of the systems in nature contain random geometric structures – that is, structures that are not perfectly regular or symmetric. One example is the system of the billions of neurons in our brain,” he says.

Aru came to EPFL three years ago after completing a postdoc at ETH Zurich. He now teaches two Bachelor’s and two Master’s classes and was named the best teacher in his section for 2020. “My role is like that of a mountain guide,” he says. “To lead students to the top of a mountain, I have to know the peaks and valleys, the difficult stretches, the rest stops and what interesting details to point out along the way. The mountains themselves never change, but you can always find new routes to take. The trek is not easy, and I get happy when my students get happy.” Aru adds that studying mathematics requires a lot of hard work, patience and diligence, but once you’ve mastered the core concepts, it becomes a lot easier.

Videos instead of a chalkboard

While Aru has always been a fan of the chalkboard, he had to adopt new practices during the pandemic – a change he took in stride. “I like the aspect of freshness,” he says. “I thought about what I could do to help students learn more effectively. For my Bachelor’s classes, I created short videos that they could watch at their own pace. The videos didn’t follow a linear path, unlike the class notes they went with, some gave a birds-eye-view, some zoomed in on details”

"More than mathematics itself, what I really like is the process of doing mathematics. It’s a way of escaping the world.

- Juhan Aru, an tenure-track assistant professor and holder of the Chair of Random Geometry

The two Bachelor’s classes he gives are on metric and topological spaces and probability. “To keep my students engaged during the pandemic, when classes were being given online, I asked them to work in groups to write out the proofs. We then discussed them together the following week,” says Aru. He also maintained the two weekly exercise hours for his classes during the pandemic. “I enjoy discussing things with students, answering their questions, and the overall feeling of working and studying together,” he says. Collaborative effort is also an important part of his Master’s classes on Gaussian processes and on concentration of measures. These are optional classes with students from a variety of backgrounds. “Here the challenge is addressing their range of interests and building group cohesion,” he says.

Aru generally tries to make his classes an enjoyable, interactive experience for students, even though the topics he covers can be tough. Discussions with curious students enrich his research and help break the solitude that many professors experience when they get too wrapped up in their thoughts. But he’s nevertheless a researcher at heart. “More than mathematics itself, what I really like is the process of doing mathematics. It’s a way of escaping the world,” he says. Aru also enjoys escaping through mid-20th century literature and modern poetry, and he likes taking long walks in the countryside – although, like Möbius strips, they always end up taking him back to mathematics.