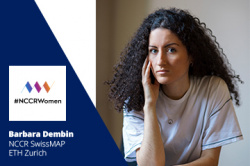 Barbara Dembin joined SwissMAP in 2020 as a Postdoc (ETH Zurich, V. Tassion’s Group). She completed her PhD at Laboratoire de Probabilités Statistique et Modélisation (LPSM) under the supervision of Marie Théret. She is now working on percolation, first passage percolation and Boolean percolation.

Barbara was one of the two laureates of the 2022 SwissMAP Innovator Prize which she received for her outstanding contributions to first-passage percolation and related models.

What are the biggest challenges women scientists face, and have you ever encountered discrimination because of your gender?

I would say that one of the biggest challenges that women face is gaining recognition in their field at the early stage of their career. Even though, most researchers are well-intended, they may have unconscious biases and tend to judge women more severely than men.

I also think it may be tough to be part of a minority and to be surrounded by men. In my research group, I am the only woman and I sometimes miss interactions with other women researchers.

I have not experienced any truly traumatic discrimination during my career. Being a woman, however, I put a lot of pressure on myself, and I used to focus on how people judged me. I still feel pressure, though I'm working on it. To do research in maths, it is very important not to be scared of being judged and in particular not being afraid of saying wrong things. I have the impression that most women feel more judged when saying wrong things and as a result they tend to speak less. When doing math with someone else, you need to say whatever comes to your mind. Maybe you will say wrong things, but the others can bounce on these wrong things and generate from it new ideas.

We now have many actions being put in place to help women researchers. In your opinion, what are some of the positive but also negative effects that these actions could have?

I don't have strong opinions about quotas. Though I definitely think that having more women will help to attract new women. Besides, there are so few research positions and so many talented women, that I believe you can almost always find a very good woman candidate for any position.

Why did you choose a scientific career?

I didn’t choose it specifically; it was just the default option. I was told, that if you’re good at math, then you can do anything. I chose math because it’s a very general path and I could postpone my choice of career. When the time came for me to choose, I initially thought I would start a career in industry. I realised it would be very difficult to find a job where I could do something that stimulates me as much as maths. After a lot of thoughts, I figured out that doing math was the thing that I really wanted to do.

If you weren't a scientist, what would you be?

I think I would love to be a chef, because cooking and in particular coming up with new recipes is also a form of research. You need to research and try new things that have never been done before. It's very intellectually stimulating and exciting.

What is the most rewarding part of doing research?

For me, it’s when you have been working on something for a very long time, and you finally find the solution. The projects that took me the longest time are the most rewarding to me.

What is your favourite thing about research/science?

Firstly, the fact that I am always learning and I will still keep learning new things as math is infinite.

Secondly, I also like working with people as I learn a lot from the others.

What's your least favourite thing about research, how do you improve it/make it easier to deal with?

The precarity at the early stage of the career: we cannot really choose where we live and we get a permanent position quite late.

Another annoying aspect is that it’s very difficult to stop and “switch off”. When you are done working after an intense day, you’re never actually done; it is hard to completely stop thinking and focus on something else.

What would you like to say to your younger self about a scientific career?

I would say to go for it. I’m very happy to be here now and for the path that I have taken. In high school, I didn’t know what a researcher was, and it was not something I thought one could do as a job. The randomness of life brought me to research and I would not change anything of my path to arrive here.

What is your wish for girls studying science in school today?

I wish girls no to be sensitive to prejudice and not questioning the fact that they are doing science because they are girls.

Any last advice for young women in science?

I would say, enjoy as much as possible what you are doing and don’t put too much pressure on yourself. Also don’t be easily impressed by others, especially in a field where you’re mostly surrounded by men.