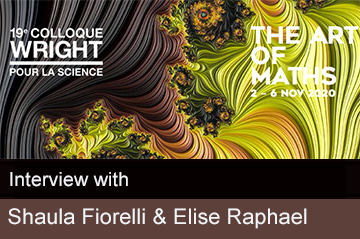 Every two years the Wright Colloquium brings fascinating subjects to the broader public in order to encourage a greater understanding of science. In 2020, the 19th Wright Colloquium “The Art of Maths” (2-6 Nov) was completely devoted to mathematics. Due to the unprecedented conditions this year, the event took an altogether very different format than in the previous years.

From the beginning, our members Shaula Fiorelli (SwissMAP Outreach Officer) & Elise Raphael (SwissMAP Science Officer) collaborated with the Wright Foundation and the University of Geneva at different levels and stages of the event organization. In this interview they discuss the challenges, results success of the Wright Colloquium “The Art of Maths”. 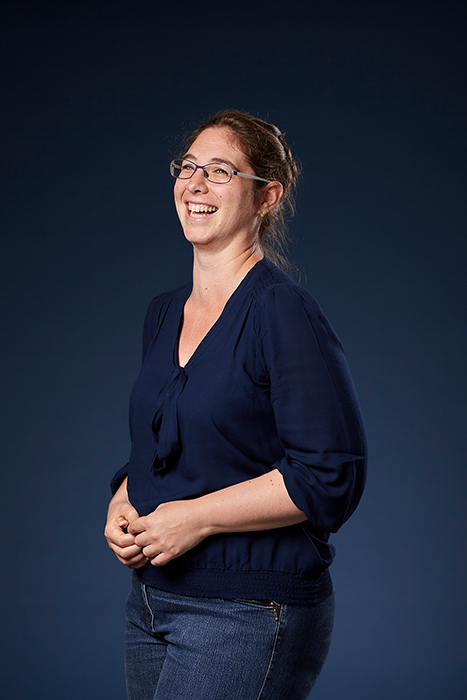 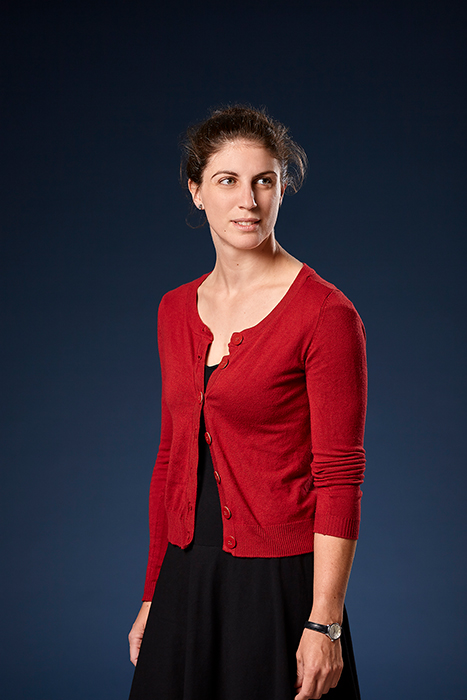 Was there any hesitation when the subject on maths was chosen? At the beginning of the discussions there was some initial internal hesitation regarding whether maths would be a subject which would generate enough interest, linked perhaps to the idea that there is a poor image of mathematics amongst the general public. The question was, for what reason should other subjects from previous years, such as gravity or gravitational waves, be more of interest to the general public than maths?

The success and results from this year’s Colloquium leave no doubt about the choice of the subject and angle by which it was approached. “The Art of Maths” sparked curiosity from the beginning, starting with the image that was chosen to promote the event which broke away from other more traditional ways in which maths has been presented.

Not only did the event succeed to attract and engage the general public with almost 400 people from different locations connected every evening, and actively participating in asking questions but it also brought mathematics and researchers closer to the general public. Each of the speakers exposed the subject under a different light.

Can you tell us about the criteria for choosing the speakers? We were not directly involved in the process of choosing the speakers, but choosing the right speakers who were able to bridge their research to the general public was an important task for the organizers. We believe the selection criteria were first to be very well known in the field and secondly to be able to speak to the general public about their research. All of the chosen speakers are outstanding internationally renowned researchers but what is also interesting about them is that they are all involved in the popularization of mathematics and reach out to different segments of the general public through different ways.

As an example, just after receiving his Fields Medal in 2010, our Director STANISLAV SMIRNOV (University of Geneva), was very committed to promoting mathematics amongst secondary school children, visiting schools and giving a series of conferences. Another different example would be ETIENNE GHYS (CNRS ENS Lyon and Académie des Sciences Paris) who is also widely known for addressing the general public through conferences and also through the web, examples amongst others, the online series of films “Dimension”.

You were both present every evening as the public talk’s Q&A session moderators. As this year the event was online this session had a especial and valuable significance as it was the only real connection between the audience and the speaker. Could you tell us about the difficulties you encountered?

Running a virtual Q&A session is very different from a live session where people just raise their hands. It is actually a very intense job and not an easy task. It involved firstly going through and reviewing the list of questions, there was an average of around 20 questions per talk, the questions came in continuously throughout the talk and at the same time remaining concentrated on the content of the talk as the chosen questions needed to be appropriate and in line with the content of the talk. The questions also had to be articulate and interesting but not too complicated or technical, as for timekeeping reasons it was important to make sure that the event moved forward and did not get stuck on certain questions.

Having the journalists during the discussions was very helpful, scientist need to be directed and being asked a precise question provided a common thread and also helped to keep the answers short and understandable.

What were your favourite moments of the conference?

Shaula: Perhaps the discussion with ALAIN CONNES (Collège de France, Institut des hautes études scientifiques at the University of Paris-Saclay and Ohio State University, Columbus) after his talk “The music of shapes”. Especially the way he provided simple explanations on such an incredibly broad range of subjects, with his very calm and pleasant voice.

Elise: Indeed I enjoyed the debate with Alain Connes a lot ! He is a very articulate speaker, and I found myself wanting to listen to his answers more than participating... However, my favourite evening was LAURE SAINT-RAYMOND’s (École normale supérieure in Lyon) talk “Disorder, chance and large numbers”. I found it was a very lively talk and the debate between her and Hugo Duminil-Copin (UNIGE) was also extremely interesting. They both have a very hands-on approach. It was also the topic which made it very understandable as you can start from very concrete examples. The discussion after the talk was also particularly interesting, when she talked about the need for creativity to be a researcher. I’m also glad she got to talk about popularization in mathematics, and how different it is from research.

Shaula: Another favourite moment was when the question for MARTIN HAIRER came up about by what he had been most influenced and who had most inspired him when he studied mathematics in Geneva. MARTIN HAIRER’s provided a very touching answer in which he expressed that he had been most influenced by Jean Pierre Eckmann (UNIGE). What was great was that as Jean Pierre was also there he was able to reply, they shared this special moment between advisor and his former student with the audience.

Elise: Yes! And also the moment Jean-Pierre Eckmann presented MARTIN HAIRER: he did not stop at the Fields Medal or other outstanding prizes but centered his presentation on HAIRER’s childhood. Jean Pierre knows MARTIN HAIRER’s father, who also taught at Geneva. He showed pictures and made us laugh.

Shaula: It was a special moment, it was as if he brought “a real man” to the public and not only the mathematician.

Can you speak to us about the participants? The Wright Colloquium has traditionally always attracted a wide spectrum of participants of all ages from the general public. Starting with its sound and light show as well as the workshops aimed at a younger public, both unfortunately postponed this year due to the pandemic. The public talks on the other hand have always brought in people who already have an interest in science.

As the format of the talks this year had to be readapted and moved online, the direct contact with the public was lost and it is therefore difficult to evaluate their background. However, based on the type of questions received from the public during the talks, they were mainly people who were interested in science but not necessarily mathematicians.

There was a very peculiar ambiance to the nearly empty conference room, particularly during the debates where the people present sat in a circle and there was an armchair with the screen showing the speaker.

Despite the void created by the absence of the clapping at the end of each talk and the valuable networking moments, the conditions this year also gave way to new possibilities. Firstly expanding the audience, participants throughout Switzerland were registered as well as participants from other European countries. Secondly, the ability to extend the life of the event as the Public Talks and the Exhibition remain online. Only nine days after the Public Talks, one of the videos approached 4000 views!

The Feedback from the public has been great. They said I loved it!

Elise was also contacted by people who said they had attended the Wright Colloquium this year after having listened to her on the RTS Radio programme “Les Dicodeurs” the week prior to the event.

Elise: I'm glad I got the opportunity to present the Wright Colloquium on the RTS via Les Dicodeurs : it was a lot of fun and, I realized later, a great way to reach people that would never have been to the Colloquium otherwise. It was also very nice, albeit quite stressful, to present Alain Connes and sit "with him" for the discussion on the day of his colloquium. To prepare for it, I read some of his books and articles, which is something I probably wouldn't have had the occasion or time do otherwise.

What about the Exhibition? When the idea of an exhibition was first discussed, there was an initial debate on whether it should be art in maths, maths in art, math that is using art, beautiful maths images…

When the decision of “Beautiful Maths” was defined, finding beautiful images was not such a difficult task as there are plenty in mathematics! More challenging was to get the researchers who provided the images to write a concise explanation that would be “almost understandable” about the image.

The feedback from the online exhibition has again been positive in spite of the loss of direct contact with visitors. Between October and November, the exhibition webpage alone registered over 2000 views. A school has also expressed interest in showing the exhibition in their school.

The aim was not only to present a beautiful image with an explanation but also to fully engage the visitors and to make them participate. The challenge then became to find a question for each of the posters which would be at the same time interesting and not too easy.

For those who have not yet visited the exhibition and are curious to discover the images, the explanations and the questions, it is also now available in English. Also for information, and for those interested in art using maths, Mathscope has recently contributed to the University of Geneva’s Campus Junior which proposes examples of outside sculptures in Geneva and Lausanne which were inspired by geometry or mathematical forms.

Why were the videos “Scientific experiments” created? In previous years, the UNIGE’s Scienscope team has been there to welcome the audience before they enter the Wright Colloquium Public Talks. The idea being that each one of the Scopes presents their work to the general public attending the talks. As the conditions changed this year, it was decided to create the videos “Scientific Experiments” which would provide a small preview of the Scienscope .

Mathscope created the video: “Can sound be seen? From a physical problem to a numerical method” the subject was inspired by ALAIN CONNES’ talk entitled “The music of shapes”. The video tells us a story generated by the fascination of mathematicians for a physical discovery. In 1787, Ernst Chladni, a German musician and physicist, discovered that, when he rubbed the bow of his violin on a metal plate covered with sand, each different pitch that he managed to obtain revealed a new pattern. These are called the Chladni figures. Attempting to reproduce these figures numerically, mathematicians have built a powerful numerical method used today to model complex situations.

We are glad that the Wright Colloquium will remain Online and will continue to bring awareness of mathematics and the people closer to the subject. Videos from the Colloque Wright Public Talks are available in French and English through our YouTube channel. We are also looking forward to the sound and light show, the new dates will also be announced through the SwissMAP website and newsletter. You can subscribe to the newsletter through this link.